If you follow my regular account @MarkEOrtega on Twitter, you’ve noticed that for the last week my timeline has basically been informing you on what’s happened since LA Weekly was sold.

If you’re unfamiliar, LA Weekly was sold in October to a shadow company called Semanal Media. At the time nobody involved with the publication really knew who was behind the sale, and things went on like normal. Then last week, nine of the 13 editorial staff members were fired and news emerged that the people behind the purchase of the renowned publication were Orange County conservatives.

These OC conservatives are major donors to Republican candidates and PACs. Part-owner and publisher of the paper Brian Calle has ties to the Koch Brothers, and was a former vice president of The Claremont Institute, whose main objective is “to defeat progressivism” by using “positions of power and influence in government, the courts, academia, and the media.” So…pretty shitty for this guy to have controlling power of Los Angeles’ second most notable print publication, right?

One of the other investors Steve Mehr had the audacity to say that “Los Angeles doesn’t have a cultural scene on par with New York and San Francisco.” The paper also tried replacing their fired staff with a call out for unpaid contributors, misspelling Angelenos as “Angelinos”. They haven’t posted any new stories or tweets in more than four days. There’s so much dumb shit these guys have done, it’s like Trump all over again where it’s impossible to remember it all.

In the days since, a grassroots movement to expose these assholes has emerged. The people behind this movement are former LA Weekly staff members and writers. April Wolfe is the former lead film critic at LA Weekly. Jeff Weiss is a former LA Weekly writer who wrote some of its most prominent music coverage, as is Katie Bain. Their Twitter feeds have taken the new owners to task and exposed some of their deepest secrets. My favorite so far is that Brian Calle can’t even run an ultimate frisbee tournament without people getting angry with him — the dude didn’t even provide water to his staff of mostly unpaid volunteers.

They have helped spearhead a boycott of LA Weekly by getting to them through their sponsors. LA Weekly has an upcoming event Sips N Sweets scheduled to take place next Thursday, December 14. So far, nearly a dozen sponsors and advertisers have pulled out of LA Weekly and their event, including Amoeba Music, Spaceland Presents, and Resident DTLA from the LA music scene. Here is a list of advertisers and sponsors you can hit up if you agree with the boycott.

Now this Friday, December 8, an official protest of the new LA Weekly will take place outside their offices. Show up at 3861 Sepulveda Blvd, Culver City, CA, 90230 at 12 noon Pacific Time for the funeral and protest. Wear black.

LA Weekly music editor Andy Hermann was one of the staff members laid off by the new owners. Andy gave me my first opportunity to be published in LA Weekly earlier this year, and it was one of the highlights of my year to work with him multiple times. On top of that, he is easily one of the best editors I’ve worked with — he really knew how to help you focus your story and punch it up.

So even as I await a check for my last contribution to LA Weekly, I stand in solidarity with these people and the LA community as a whole in protest of the new regime. I spent a fair amount of time on Twitter trying to bring awareness to some of LA’s biggest names — and shit, sometimes it worked! Let’s expose these clowns for who they are.

UPDATE: LA Weekly cancelled their Sips N Sweets event for next week due to overwhelming amount of vendors that pulled out. 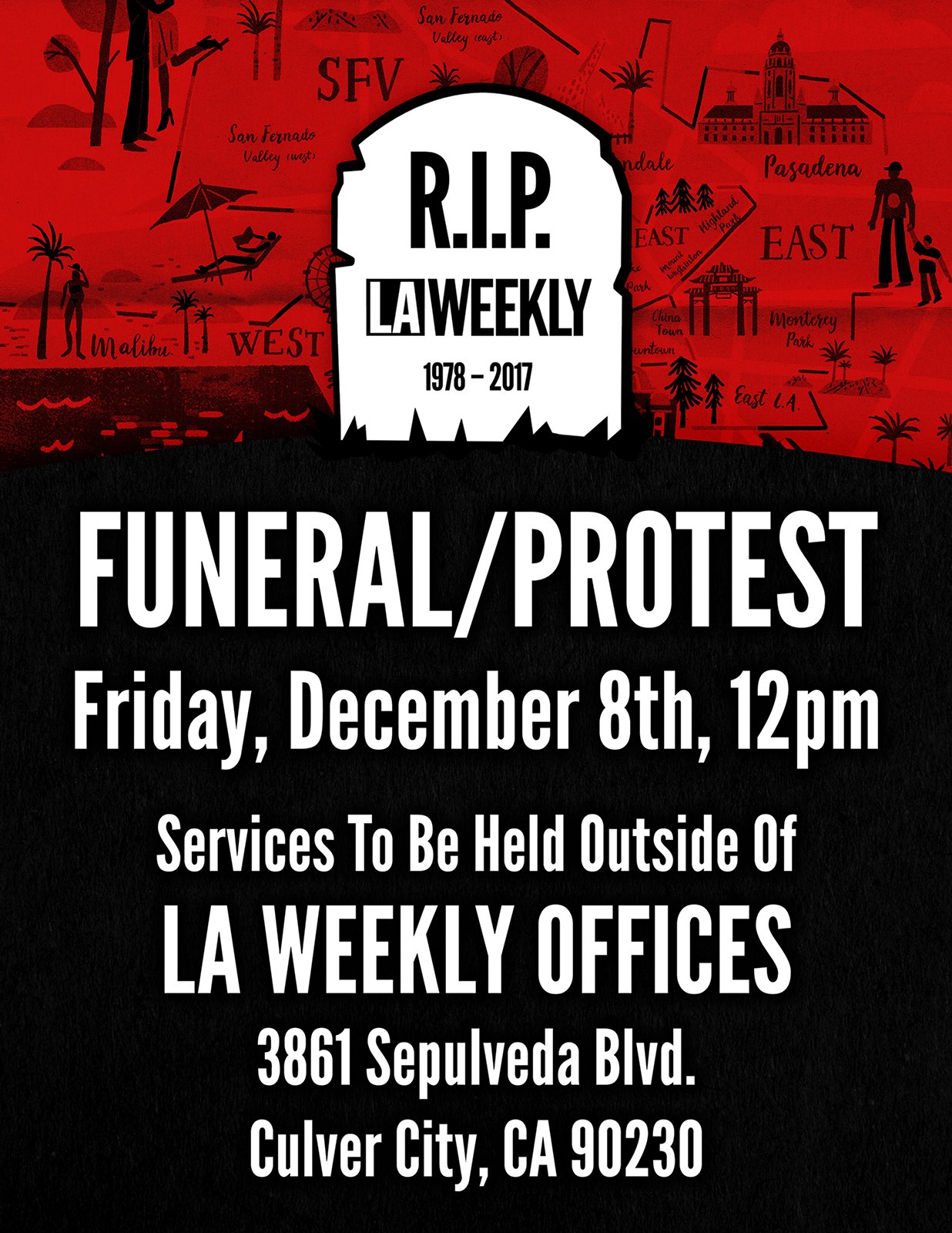 Easy, breezy BeachLife Festival is back this weekend